You are here: Home / About Us / Our Educators / Dr. Kirsten L. Stein

Dr. Kirsten would like to share (with permission) this heartfelt letter written by one of her students. It reflects who Dr. Kirsten is as a teacher. (Thank you, Tenzin!) 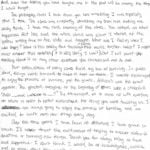 Kirsten L. Stein, Ed.D. has been involved in the field of education for three decades. She graduated with a B.S. in Education and taught elementary school in the public school system. During her time as a classroom teacher, she spearheaded the district’s involvement in inclusion practices and the use of paraprofessionals in the classroom. She continued her own education and earned her M.A. Education degree with a focus on team building. Kirsten continued to be involved in the field of education while homeschooling her profoundly gifted children. She applied her background as an educator and formed Athena’s Advanced Academy to broaden the scope of learning for gifted children. This passion was her doctoral focus in earning her Ed.D. in Educational Leadership. Kirsten strives to create a supportive community of parents and learners through her role as C.E.O. and Instructor at Athena’s Advanced Academy.

“I love how much my daughter looks forward to her webinars -for every Athena’s course. She tries to never miss one. She thrives on the interaction with other students and she always enjoys her time with Dr. Kirsten. I believe that she received the most information from the webinars and the additional information posted by Dr. Kirsten in the class. Dr. Kirsten’s positive energy is contagious. I love to hear her happy voice whenever I am nearby during the webinars. I know that her bright approach keeps [my daughter] interested and I love that I hear her laugh often during classes!” ~Parent Amanda D.