Plastic bags are very commonplace, but not just in stores. Outside in nature, these “urban tumbleweed” snag on tree branches, float through the ocean, blow across the ground, wash up on many beaches, and cause many problems. But what problems do they cause, besides being an eyesore? Are paper bags better? How can I help? All these questions, and more, are going to be answered in this essay.

Due to their light weight, plastic bags in landfills don’t always stay there. They frequently blow away in the wind, and into the rest of the world. 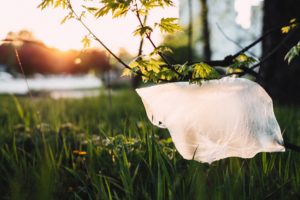 Runoff water collects and carries discarded plastic bags into storm drains. There, if they’re not washed out into rivers or oceans, they may clump with other trash to create a blockage. This often causes flooded roads, which can damage cars, buildings, and other property and collects pollutants and spreads them everywhere. It can also starve local wetlands, causing many plants and animals to die.

Especially when plastic bags are brightly colored, carry residue from food, or are animated by the movement of the water, animals frequently eat the plastic bags. Because plastic doesn’t break down very well in animal’s stomachs, the plastic bags can cause a deadly intestinal blockage or make them feel full while they starve or die from malnutrition. Animals can also be poisoned by chemicals used to create the bags or that the plastic absorbed on its way through the environment.

Plastic bags cause gargantuan problems for ocean animals. For instance, they can get entangled in them. Whales sometimes wash up on beaches after eating plastic bags. Sea turtles often mistake plastic bags for jellyfish. Another problem that might be even worse than the turtles killed directly from eating plastic bags is that when turtles eat them instead of food, their glucose levels drop, and they have less energy for migration and reproduction. Female sea turtles can’t lay as many eggs, and fewer hatchlings are born.

An estimated one million birds, 100,000 sea turtles, and countless other sea creatures die each year from ingesting plastic. In Midway Atoll, the home of the largest albatross colony on earth, thousands of albatross are found dead from eating plastic. Many animals already have many other pressures, whether they’re habitat destruction, poaching, climate change, the pet trade, or something else. Plastic adds yet another 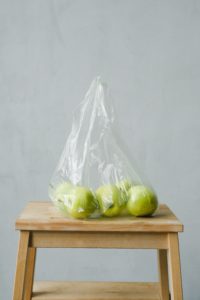 Only a small percentage of plastic bags get recycled. Though some people try to reuse them, most get used only a single time. Many are thrown away, and many get into the environment.

In 2009, California stores had to provide plastic bag dropoff bins to collect bags for recycling Only 3% were collected. And even though recycling helps, plastic can only be recycled a finite number of times before it loses its tensile strength. Though we should still bring them back to the store for recycling, first we should get as much use out of them as possible.

While plastic bags are often used for only a short period of time, they can take hundreds of years to break down in a landfill (if they don’t just become microplastic.) I myself go to a 4-H gardening spin club. There, we put a plastic bag in a clear container with some compostable things – egg shells, a strip of newspaper, a banana peel. Everything else has almost or completely biodegraded. The plastic bag hasn’t changed a bit.

Here’s a bit of statistics for you. The average American goes through 6 plastic shopping bags a week. With a population of about 300 million, about 1.8 billion plastic bags are used and often discarded each week!

At this point you’re probably thinking, “Okay, then, I’ll go with the paper bags at the store, then,” or something like that. But paper bags are not a good alternative. They take more energy to produce, for instance. About 10 million paper bags are used each year, which means 14 million trees – one of the best climate change fighters in the world – are chopped down. From a more economic standpoint, paper bags cost more to produce than plastic bags. While more are recycled, still only about 50% are. Also, paper can take almost as long as plastic to break down. While paper is so much faster under ideal circumstances (as a passionate composter, I can testify to this), a landfill is far from ideal condition. Landfills lack air, light, and oxygen. Almost nothing decomposes. 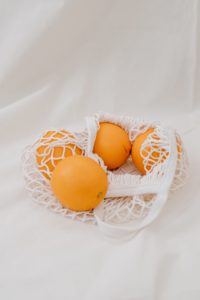 However, there is a good option – a reusable cloth shopping bag. You can reuse them for years. They have a much smaller carbon footprint than plastic or paper bags that you use once. If they get dirty, you just need to wash them. (Be sure to wash them regularly to prevent food contamination.) They’re sturdier than plastic or paper bags, able to carry more weight. Often being bigger, they can carry more. If you’re crafty like I am, you can make a bunch, too!

I understand that it can be hard to remember to bring reusable bags to the store, so here are some tips. You can keep some reusable bags in your car, or put, “Bring reusable bags” at the top of your shopping list. Putting them in other obvious places, like by the door, can help too.

If you had, say, 2 bags and brought them to the store once, that’s 2 less plastic bags. If you bring them 2 times, that’s four less. Three times? That’s six less!

True, nobody’s going to remember to bring their reusable shopping bags to the store every time. But even one less plastic bag helps.

If everyone who read this tried to pick up a bag when they saw it and recycle it (dropping bags at a drop-off center or store is best so they don’t get entangled with other recycling) and bring one reusable bag to the store, it would help a lot. It’s unrealistic to hope that one day there won’t be any plastic bags littering the earth. But every time you help there’s another flicker of hope that maybe one day, only one or two plastic bags will be fluttering in the wind. 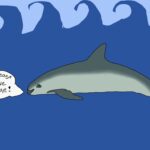 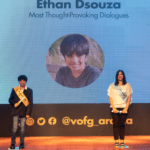 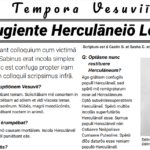